It’s not often that I dive into the latest e-commerce site just to get a taste of something new. This was an adventure that was going to shape the way I look at e-commerce for some time to come.

This last month has been a busy one for my Fiancée (Sarah) and I. We have been looking for a new home, preparing for our wedding next year, getting ready for our annual trip to California, and trying to organize the launch of a new web site–all in our spare time. It’s been chaos in every sense of the word.

It happened late in the evening on a Sunday. We had been busy all weekend working on the web site and trying to plan numerous events and God knows what else, when finally we came to realize that something was wrong. It was that feeling you get after returning home from a walk and realizing you’ve left your dog at the park, or when you’ve forgotten to feed your goldfish for two or three weeks–only to have a friend find it floating upside-down in its former home. Fortunately, we hadn’t done anything to get reported to the humane society or worse; we had simply forgotten to go grocery shopping. There was no time to run to the store, and the whole next week was booked with various appointments. I had heard about HomeGrocer.com from a friend at work and decided it was worth a shot, considering the circumstances… little did we know what awaited us.

I went downstairs to the office, sat down in front of my computer, and loaded up my browser as Sarah pulled up a chair of her own. I typed in the URL, and up it came (http://www.homegrocer.com), soft peach logo and all. Upon loading, we clicked on the “just visiting” button because I wanted to see what kind of products they carried and if the prices were reasonable. Both of us were surprised to see that they had a full array of products ranging from personal care and pet supplies, to fruits and vegetables. The prompts were easy to understand and the site was easy to navigate. Within seconds we were cruising down the Baking and Cooking Products isle. 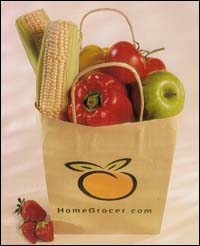 I started filling our shopping cart and noticed there was a running total off to the right. That’s not something you get at a typical grocery store until you’re at the checkout register with 18 people in line behind you. With HomeGrocer’s setup, I could easily keep track of how much I was spending, as well as add or subtract items in my shopping cart on the fly. It was a great feeling knowing how big of a dent the Pop Tarts were going to put in my wallet before deciding to buy them.

The coolest thing about the whole experience was that HomeGrocer’s prices were comparable to the local stores and a lot of the items were even cheaper. The longer we shopped, the more we noticed how much money we were saving. Our first thought was that we would spend at least the same as we would at any other grocery store, just because of the pricing. We soon discovered that we were actually spending less money by shopping online. It all goes back to the whole “grocery list left at home” scenario, of which Sarah and I are notorious for repeating. Since we were at home we could do something we had never dreamed of before–we could check the cupboards and pantry to see if we had eight extra cans of chili before deciding to buy two more, all of which we would probably never eat. It was as if our days of forgetting the grocery list were over, and we saved a ton of money doing it.

Another bonus was that we saved money by not being enticed by got-to-have displays and end-caps. We didn’t buy anything we didn’t need. It was great–we were finally making progress in the way we shopped. To top things off, we didn’t have to worry about our son running around and asking us to buy things (I secretly believe he must have anything and everything that remotely sparks his interest). He was sound a sleep in his bed while we were downstairs ordering the groceries. I also liked the fact that we didn’t have to race to find a parking spot or maneuver between shopping carts and other shoppers; and there was no line at the check-stand.

We picked out a variety of groceries, ranging from Iceberg lettuce to kid’s mouthwash. We were concerned about the quality of produce we would receive by the time it got to our doorstep, so I can’t say we went all out on the fruits and vegetables. We also ordered a Pike Place fresh baked garlic bagel; it sounded so good we couldn’t resist. We grabbed a bunch of snack food for our lunches (when you’re planning a wedding, dinning out is just a fancy), some chips and soda, a few fruit drinks, and some crackers. We went through every isle the virtual store had and filled our cart. Now it was time to go to the check-stand.

The Check-out
We were surprised to see a total of only $100, compared to the normal $200 we would spend at most grocery stores. After confirming our address, credit card number, and time of delivery (yes, you can choose when they deliver the groceries–and they have reasonable hours too), we were ready to hit the “Submit” button. In one magical moment the entire inventory of our shopping cart was displayed in front of us with the total summed up and ready to be printed–that beats the 10 to 20 minutes of waiting in the checkout line and another 10 driving home, any day. Our order was all set to be delivered on Tuesday, as we would be home late on Monday.

When I checked my e-mail Monday morning, I noticed HomeGrocer.com had sent me a confirmation message with all of my order information, just in case I had forgotten to print it. They noted that I would be getting a free produce bag as part of a promotion–not a bad little bonus. Later that day, Sarah remembered that she had forgotten to order a few things, but we had no fear. HomeGrocer.com allows its shoppers to edit their orders up until 11 p.m., the night before delivery. So far, with the easy-to-navigate site, our prices and total right up front, and aconfirmation message–not to mention the free produce–I’d say we were getting pretty good service.

Tuesday came fast, but we were glad to see the large truck with the peach logo show up in front of our townhouse. I was quickly outside and ready to see how they would go about taking all the groceries up our flight of stairs. The driver introduced himself as Michael and hauled a hand-truck loaded with boxes to the door. He unpacked them right there and brought each bag upstairs within a few minutes. Michael knew it was our first time e-shopping, so he explained the process, pointed out our free produce bag, and a discount coupon. He told us that if anything were missing or if we had and problems, to give him a call. He then wrote his pager number right on our receipt–now that’s customer service. I offered to give him a tip, but he refused and said it was against company policy. ‘Not bad,’ I thought–on top of everything, they take care of their drivers so you don’t have to.

The Pike Place bagel had to have been right out of the oven, as the aroma of fresh food filled our kitchen. We soon noticed a few minor changes were made to our order. We had ordered a large tomato, but they were all out by the time our order was packaged. Instead of giving us a refund, they sent us a premium Hot House tomato, which was much larger than the one we ordered–we were satisfied. We also noticed that the iceberg lettuce was slightly smaller than we normally would have expected–but then again, the season doesn’t always provide large heads of lettuce. That wasn’t a surprise, but what was nice was that they gave us two of them for the price of one. By the time we unpacked everything and confirmed that we received everything we had ordered we were ready for a bite to eat. Sarah dived into her fresh Caesar salad bowl and I cracked open a Coke. I was surprised to see that the coke was chilled, since you rarely see 12-packs chilled in the local grocery store. By the time we were finished, we both agreed we would surely be buying from HomeGrocer.com again.

The Follow-up
A day or so later I received a phone call from the customer service department at HomeGrocer.com, asking me if my order was all accounted for and if there were any problems. I said no, but then I remembered a few items I had trouble finding in the virtual isles of the store. The customer service rep quickly checked the site and confirmed that they were out of stock. She added it to a list that would go to their Product Request Group, so the buyers could pick up the missing goods for me. She also informed me that on my next order I would have the option to click on “My HomeGrocer.com” and all the items I typically order would be listed for easy shopping. She then explained how the e-mail for the Product Request Group works. I told her how pleased I was with the service and that I would definitely be returning for another virtual shopping trip. I must say, with everything HomeGrocer.com did to make my shopping experience a good one, I was thoroughly impressed.