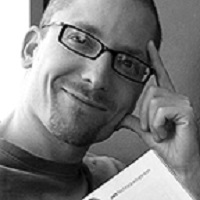 Digital Web: Hi Aral and welcome to Digital Web. Could you tell us a little bit about who you are and what your background is?

Aral Balkan: Hey, thanks for having me!

I always find this a hard question to answer. I want to say so many things—designer, developer, programmer, speaker, actor, singer—all things that I love to do and, quite miraculously, love to do. I’ve been programming since I was about seven years old, when my dad brought home my first computer, an IBM XT Compatible, which had a whopping 640KB of RAM at a time when Bill Gates was telling us that we’d never a byte more. I grew up loving theater and performing and starting singing while at high-school. That part of my life culminated with a short stint at the Liverpool Institute for Performing Arts where I discovered that I loved that stuff too much to do it professionally. At about the same time, while working on my undergrad and grad degrees, I discovered graphic and interaction design, the web, and Flash, and found that my programming skills fit right in on this digital medium and I’ve been developing ever since.

AB: <head> is an experiment in creating a new type of web conference that’s environmentally friendly. Instead of flying speakers and attendees from all around the world to a single spot on the Earth, everyone stays where they are and presents and interacts without leaving their local communities.

DW: Wasn’t the conference called Singularity? Why did you change the name?

AB: It was. Unfortunately at the end of August we got a letter from a company informing us that they had registered Singularity as a trademark in the trademark class that includes, among other uses, the organization of conferences. They didn’t seem to want to talk to us about it, instead preferring to have a legal conversation between our lawyers and I decided that we just didn’t have the time or budget to get into that with two months to go. It was actually a very difficult decision to make, but a grueling three-day redesign later, we were back up and running as <head>.

DW: Why did you choose to go for completely online, rather than offer a “meat-space” venue and webcast from there?

AB: Well it’s a combination of both, <head> is not entirely an online conference. We have local conference hubs in various cities and, if you happen to live in one of those cities, you can attend the conference in “meat-space”. Some of the local conference hubs, like the London and Manchester ones, for example, have speakers presenting from them so, in essence, it’s like a federation of many little web conferences.

DW: Won’t we miss the best bit of conferences such as the hallway conversations and social gatherings, if the “attendees” are scattered around the world?

AB: Social interactions are at least as important to the conference experience, if not more so, than the sessions. As someone who speaks at and attends at least a dozen conferences every year, I find that the best sessions inspire me and spark conversations but that those conversations are then best realized in the hallways and social gatherings. Our biggest challenge in organizing <head> is to find virtual ways of encouraging and facilitating the social experience. Thankfully, the web is no stranger to social communication. We are taking advantage of the full spectrum of available channels, both via the social aspects we are planning on introducing on the site and through existing channels like Twitter, mailing lists, social video networks like Qik, and a social hub in Second Life that is currently under construction. And, of course, the local conference hubs provide a more traditional, real-world opportunity to meet people and network.

DW: How do you plan to encourage social groups around the world, and how can people get involved in their local area?

AB: We currently have a Google Group for local conference hub organizers, and anyone who is interested in organizing one. We’re also getting support from various Adobe User Groups (Adobe is one of our Platinum sponsors). We encourage local community groups to get involved and local hubs can host local sessions in addition to the global ones and get local sponsors. As this is the first year, it doesn’t look like we’re going to have dozens of global hubs but there is still time for more hubs to be confirmed before October and anyone is welcome to organize social meet-ups and gatherings to coincide with the conference.

DW: Has this been done before? Why do you think the Flash community have done this when nobody else has?

AB: As far as I know, a global conference like this has not been attempted previously. While I’m very heavily involved in the Flash community and with Flash and Flex technologies, I consider myself, first and foremost, a web developer. Thankfully, we’ve reached the point where Flash is an accepted platform within the greater web. What influenced me to organize <head>, apart from the obvious desire to create a green alternative to the traditional web conference format, was to try and bring together an eclectic group of presenters and sessions that covers the traditional web as well as RIAs and Flash. I’ve been making an effort in the past few years to bring the two communities closer together and this is, in a way, the latest chapter in that effort.

DW: What sets <head> apart from the other myriad conferences on at the moment?

AB: To start with, <head> is environmentally friendly. We’re preventing thousands upon thousands of tons of carbon emissions from ever reaching the environment by not having speakers and attendees fly to attend the conference.

<head> is also affordable in more ways than one. The ticket price, $149, is very low for a web conference and you don’t have hotel or flight costs. Since it takes place over the weekend (Friday-Sunday), and since all the sessions are recorded in addition to being streamed live, you don’t have to take time off of work either.

Also, quite paradoxically, you get to interact with the speakers far more than you might do at a regular conference. (For example, everyone gets to ask questions during the Q&A sessions whereas you may have limited access to speakers at a conference.)

DW: What can you tell us about the infrastructure behind the scenes? How will you cope with video casting to many thousands of visitors, potentially simultaneously? What new applications have you written for the conferences and what lessons have you learnt along the way?

AB: We’ve had the technology to hold this sort of conference on the Flash platform for several years now; it’s stable and reliable. The conference itself is going to be hosted on Adobe Acrobat Connect Pro, courtesy of Adobe, and we are limiting our numbers at 2,000 to make sure that everyone gets a good experience.

The web site for the conference is hosted on Google App Engine, the new cloud computing platform by Google. Building on Google App Engine has been a fun and, at times nerve racking, experience. As a new platform, it has tremendous potential and yet, as with any new technology, we are constantly learning as we go and quirks are to be expected. The engineers at Google have been wonderful in working with us to make sure that everything runs smoothly and have helped get us up and running again very quickly whenever we’ve had any issues.

As part of <head>’s focus on openness, we’ve released several open source projects. Basically, as we learn new things, we try to release then and share with the community. One of those is The GAE SWF Project, open source examples for getting Flash and Flex developers up and running with Google App Engine. Another is Open Country Codes, an API for developers that provides a constantly-updated list of the ISO Alpha-2 Country Codes in various formats. Finally, we have another small project called isVAT, a simple European VAT Number Validation API. These are all things that we built for ourselves and decided to share. That’s part of the <head> philosophy.

DW: What happens when something goes wrong with the technology? How are you going to stop the conference grinding to a halt when someone’s connection dies?

AB: We are preparing to test, test, and test again! Of course, it’s quite possible that there may be a glitch in a speaker’s internet connection and, if that happens and we cannot fix it in time, we will re-record and release the presentation. All of the presentations are recorded as they are being presented so you can always watch them after the conference. We are also going to be using Qik at the local conference hubs to create a secondary mobile video network to facilitate communication between hubs in case any of them experiences an Internet issue.

That said, in my experience of running virtual presentations of the Open Source Flash community in the past few years, such issues are few and far between and I’ve actually never seen a presentation canceled because of connection issues.

DW: Finally, how can people get involved with <head> and where can they buy tickets?

AB: The best way to get involved with <head> at the moment is to attend it! Tickets are $149 and are available now.

Aral Balkan is a web developer, conference organizer, and Flash Platform veteran with over a decade of experience in building web applications. Aral is an active contributor to the Flash and web communities. He is a published author, co-founder/coordinator of OSFlash, author of the Arp framework, and the creator of the native data format for Flash, SWX. His open source contributions this year include The GAE SWF Project, and OpenCountryCodes.

Frances Berriman is a client-side developer for the BBC by day and a microformats evangelist by night. She’s usually found complaining about almost anything, watching zombie flicks or very occasionally blogging at fberriman.com.