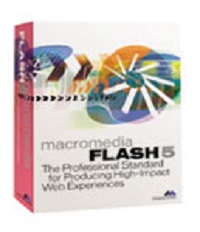 Who would have thought a few years back that a little app known as FutureSplash Animator would come to dominate the world of web animation? Apparently, Macromedia did and made it happen. Already at version 5 in about 3 years, Flash is at the top of web employers’ wish lists when it comes to designers and content developers. It is amazing what can be done with Flash, simply because (if done right) it bypasses bandwidth limitations that would be choked by full-motion video. There’s no doubt that you know what Flash is if you’re reading this, so let’s pop the hood on the latest version and see what’s new.

The first thing you’ll notice is improvements to the interface that bring it up to speed with the other new Macromedia products. Menus and tools are now grouped more logically. The use of tabbed “panels” improves ease of use and makes the workspace more efficient (and also sparked a lawsuit by Adobe). You can now dock panels together or pull out just the ones you need. Some panels bring out tools that were once bound to menus, and everything seems more compact. New icons are tighter and smarter looking, and overall the interface looks much less toy-like than previous versions. One thing I’d love to see is the ability to detach the timeline from the movie area, because I’d be much more comfortable with the timeline on the bottom. Plus, I think it would eliminate a lot of annoying scrolling for those working at smaller screen resolutions.

Overall, these new features make the upgrade well worth it. Although I encountered some quirks and possible bugs, I didn’t run into anything that slowed me down too much. The organization is much better, and the interface looks less like a toy than previous versions. Hopefully Macromedia will get to keep the tabbed “panels,” because they make life much easier. I found working with version 5 to be more streamlined and intuitive than previous versions, but I still think newcomers have a somewhat tough learning curve. Thankfully, there are still helpful tutorials included, and all documentation is included and viewable through your web browser.

Although my impression of Flash 5 is favorable, I must admit that I don’ use the program on a daily basis. My professional experience with it has been occasional and not very complex when it comes to scripting. Early after the release of version 5, I heard grumbling from a few developers about the changes in ActionScript. I think that since more people are comfortable with writing JavaScript than version 4’s ActionScript, this version will be friendlier to the web development community and those just starting to use ActionScript.

My primary complaint with Flash has always been the fact that the timeline is frame-based rather than object-based. While the frames are necessary for some types of animation, I think it would be great to have a choice. Sometimes the frames can be clumsy, and going back in and editing at the end can be a chore. Since so much of Flash’s functionality is built around frames, I highly doubt we will see a change in this area. That said, Flash does things no other application can, and does them extremely well.

A review of Macromedia’s Generator 2

Generator 2 is aimed at developers working on web sites that require regular updates. Although at nearly a grand, it may seem a bit expensive, it quickly pays for itself when contrasted to the time otherwise spent updating static pages. Able to pull from live info, databases, and other web sites, Generator allows web sites to stay dynamic without the need for the developer’s constant attention.

There are 2 editions of Generator: Developer and Enterprise. Developer is suitable for low-traffic and small-scale web sites and Intranets. In other words, the Developer Edition will not work for high-traffic entertainment, info, and e-commerce web sites. Enterprise Edition adds capabilities like data caching and can easily support 1 million visitors.

The program is tightly integrated with Flash, and relies on templates and objects (pre-made or custom) to build dynamic pages. But thankfully design is kept separate from content in Generator, so there won’t be any worries about fouling up your design when working with the content areas. It’s a nice way to bring in data and images to your Flash presentations without having to tinker with the FLA files every time the content changes.

Anything that cuts down on tedious repetitive web work is great, but unfortunately for now authoring can only be done on a Windows box.