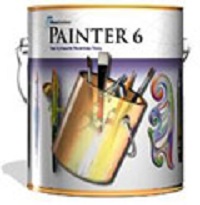 MetaCreations’ Painter™ is an inspiring tool, which is what sets it apart from most other graphics applications. Coming from a fine art background, I really appreciate the ability to use natural media in a digital environment. No mess, no cleanup, no chemical headaches and lost brain cells. Plus, I can combine media in Painter that would make a muddy mess in real life, like layering chalk over oil paint. While you can break some rules of real-life possibility here and there, it’s Painter’s faithfulness to nature that makes it so useful and versatile. Rather than force a strict set of standards on the user, this application becomes an extension of the artist’s creativity. Just like a pencil or paintbrush feels comfortable in the hand, Painter grows into a comfortable, organic creative environment. Whether you’re a graphic or fine artist or illustrator, there’s no doubt you’ll be interested in taking a look at Painter 6.

That being said, earlier versions of Painter had the drawback of a steep learning curve, caused by a dizzying array of control variables and some idiosyncratic features that were hard to grasp at first (like floaters). Painter 6 offers great improvements for experienced users, and should be much easier to learn for first-timers as well. While I passed on the Painter 5.5 upgrade, which focused on mainly web-oriented features (some of which were a little cheesy), Painter 6 is well worth the asking price with its improvements and new features.

The best place to start is with the new interface. While the controls are similar to those in previous versions, the organization is what’s new. Control sets are grouped onto floating windows, and are accessed by collapsible pull-downs. This new method keeps the controls open and visible, yet out of the way. What’s more, each tool tab now displays numeric values where applicable. So, we now have a “score card” that displays where each variable is currently set without having to expand every control window. You can also drag these variable tabs up and down in their respective windows and create custom palettes to conform to your work habits. You can also customize the interface set’s look if you’d like.

Among the new features, the addition of layers is easily the best in terms of improving ease-of-use. Layers do not replace the sometimes-confusing floaters, but augment them. The layers work similarly to those in Photoshop, and are a welcome addition. A feature unique to painter, layers can be grouped together to be treated as a single unit. You can also lock layers to prevent any unintended changes to them. I believe that the addition of this feature will be the most popular reason for new users to pick up this program. If you’re familiar with layers in other programs, it’s not too much of a jump to use them successfully here.

The most impressive new set of painting tools is the impasto brushes. These brushes add three-dimensional depth and realism to the painting by adding highlights and shadows, which are under tight control by the user. The impasto effect can range from a realistic brushstroke look to a thick, sculptable surface. I had a lot of fun smearing paint around on the canvas like modeling clay. This new feature goes a long way toward furthering Painter’s digital mimicry of natural media. It’s very possible to produce something with this program that cannot be distinguished from a traditionally rendered piece of art.

The way Painter 6 renders the strokes is also much faster and more responsive than in previous versions. This is done through the “next-generation” brush engine, which speeds up rendering times and brings brush sensitivity down to the pixel level. This means less wait-time between stroke and screen result, as well as more realism in how the tools and brushes apply and move the media on the canvas.

Along with this pixel-level sensitivity comes Painter’s new ability to mimic brush loading. Now, each separate bristle of a selected brush can be loaded with a different color, thus heightening the realism of how the brushes react. This is similar to how real paintbrushes pick up other colors incidentally as the painter moves the brush along wet areas of a canvas. Smears and surface mixing are now much more detailed and controlled.

Painter 6 a not just a raster image tool, but also has the capability to draw and layer in vector images and text. This means you can dynamically edit any shapes you draw and go to print at any time without rasterizing them. The new “text on a curve” feature also lets you layout and reshape text on a desired path, also without committing to a rastered image before printing. This alleviates the stress of keeping separate editable vector files for your images and offers unlimited access to make changes to the image.

For those of you new to Metacreations’ Painter, there are so many features that I can’t begin to list them all. Not only do you get just about any natural media tool you can imagine, there are also photographic tools and special effects. You also have control over how the media react with each other and the paper/canvas, plus numerous paper textures that can be combined and layered. Each variable has a precise control set to make sure that it’s your creativity coming out on the screen, and not Metacreations’. One of the most often hyped features of Painter is the image hose, which spits out a sequence of images set by the user. And don’t forget “liquid metal,” dynamically controlled mercurial globs you can push around on your canvas.

Painter 6 offers many new improvements in speed and usability which keep it both up-to-date and desirable as a design and art tool. If you have a Wacom™ tablet hooked up to your computer, you may abandon traditional drawing and painting tools altogether in favor of Painter’s versatile tool set, because it’s that comfortable. It’s also probably the most customizable piece of graphics software out there, so you have complete control over your own environment. Just keep in mind that you will need a powerful computer, a lot of HD space and plenty of RAM to keep Painter 6 happy. It’s a professional tool, and is only weighed down a bit by the inclusion of some amateurish things, like some of the image hoses and web-specific features. No one should encourage thick bevels and cheesy glows!

The new manual for this version is a lot thicker than those for previous versions, and is no longer spiral-bound. It’s full of clear information and examples, and is a necessity to read if you haven’t before. Make no mistake–it’s very unlikely that you could intuitively get the hang of Painter without reading the manual. My only complaint is that I wish it were still spiral-bound. My copy’s spine was unglued when I cracked the can, so I had to have it replaced. I was surprised how quick and responsive customer support was, and had the new manual within a couple of days.

Bottom line–this app kicks ass. If you are an artist or designer, you’ll appreciate the amazing capabilities of this unique tool. Metacreations Painter 6 is not a competitor to Photoshop, in my mind–I use them for different purposes. I can sit for hours experimenting with different tools. Sometimes I end up with a mess, and sometimes I end up with an inspiring image sitting in front of me–just like with pencil or paint, but far more flexible. I love using it now, and look forward to seeing future versions.