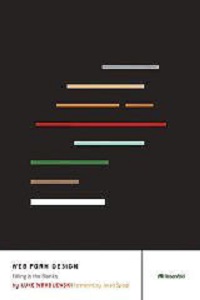 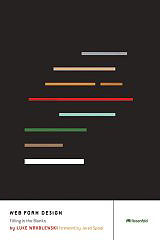 Bloggers are often told to “find their niche”, and Yahoo!’s Luke Wroblewski has long been comfortable in his. The Functioning Form blog is an essential read for anyone interested in the field of interaction design, and he has become a regular on the conference circuit, sharing his experience gained at both Yahoo! and eBay. His first book—Site-Seeing: A Visual Approach To Web Usability—took a holistic look at web design, but this time out Wroblewski confines himself to every designers best friend, the humble web form.

(Before plunging into the review proper, I should just say a few words about the publisher. Rosenfeld Media has entered the packed ring of publishers focusing on web topics—we all have bookshelves lined with books from established heavyweights like Friends of ED, O’Reilly, and Peachpit Press. But while some smaller publishers can be prone to losing points when it comes to the design of their books, Rosenfeld’s catalog so far (compirising this book and Indi Young’s ‘Mental Models’) are beautifully laid out, easy to read, and packed with glossy screengrabs and clear iconography. Purchasing directly from their site also nets you an electronic version of the book in addition to the paperback.)

The primary goal of any web form, says Wroblewski, is “getting people through them quickly and easily”. Forms are barriers between user needs and business goals, and naturally both sides of the equation want to see these hurdles removed. “It’s no wonder,” he continues, “that form design matters.”

With that basic premise stated, the book is a series of well-explained, well thought-out pieces of advice, as Wroblewski looks at first the structure and then the details of a form, with annotated examples scattered throughout. Of course, what we really want to know is how best to design and layout our forms—and, despite a constant cry of “it depends”, the book is chock-full of specific, actionable advice on such subjects as label alignment, input selection, field length, indicating optional fields, providing help text, and building flexibility into your forms.

The book is divided into three logical sections; structure, elements, and interaction, and each chapter ends with a neat summary and restatement of the best practices covered in the preceding pages. Scattered throughout the book are additional valuable “perspectives” from other leading figures in the world of UI —Jared Spool relates how changing one button increased sales by $300M per year, while another boxout provides advice on accessibility considerations in form design.

Chapter by chapter, the book tackles and solves every question you’re likely to encounter while designing, building, and implementing web forms. Each section is a coherent look at one aspect of form design, and Wroblewski’s conversational style and deliberate avoidance of the technical aspects of the topic will keep you engaged.

Submit buttons get a chapter all to themselves, together with the results from an eye-tracking usability study conducted especially for the book. Wroblewski presents possibilities and clearly explains the benefits and disadvantages of each choice. Error messages are also deserving of a full chapter, again full of examples and evidence-led conclusions on the most effective ways to present these critical messages to your users.

Regular readers of Luke’s blog may recognize some of the examples and screenshots that crop up in the book—indeed, significant amounts of the content will seem very familiar if you are a fan—but the value of collecting everything in one place is self-evident and deserving of a place on any designer-developer’s bookshelf. And, despite a target audience presumably already fairly familiar with the subject matter, there are still a few thought-provoking topics in the book; smart defaults and progressive engagement both introduced new ideas which more than made up for the slight feeling of deja-vu in other parts of the book.

Somewhat disappointingly there is no mention made of relying on scripting among the lengthy chapters on selection-dependent inputs, inline validation, and the like. I would have liked to have seen a discussion, however brief, on the implications of choosing a form design that is going to pose significant problems to users for whom, for whatever reason, scripting is disabled.

The final two chapters take a detour from form design to discuss web forms from a more strategic point-of-view. “We can do better,” says Wroblewski. “In fact, I believe we can get people engaged with digital services in a way that tells them how they work and why they should care enough to use them. I also believe we can do this without explicitly making them fill out a sign-up form as a first step.”

Web Form Design is that most curious of web-dev books—one without a single line of code within its pages. (Alright, that’s not entirely true—there are a couple of snippets on the final pages from Aaron Gustafson, but Wroblewski himself offers no advice on the actual building of web forms.) Instead, we are treated to a masterclass in design theory, and the year’s first essential purchase.

To claim a 10% discount off the price of the book (when purchased direct from Rosenfeld Media), just enter our exclusive Digital Web discount code: DWWFD10.

Matthew Pennell works as a senior designer for one of Europe’s leading hotel booking websites, writing semantic XHTML, bleeding-edge CSS and JavaScript that usually works. He is the former Managing Editor and former Editor in Chief of Digital Web, and blogs at The Watchmaker Project.