For years, Flash has enabled animators to produce some inspiring results. But those with traditional character animation backgrounds may have found the tools and production environment within Flash somewhat difficult and lacking. Toon Boom Studio is an impressive software application aimed at animators who are delivering in SWF and Quicktime formats. Its rich feature set and ease of use will make it attractive to traditional animators wanting to go digital, as well as designers and artists who are interested in exploring character animation for the first time.

This is not to say that Toon Boom is a direct competitor for Macromedia. Think of it more as a cooperative or supplemental application. In fact, Flash MX ships with a special importer for Toon Boom Studio files, similar to the importer Flash uses for Electric Rain’s Swift 3D files. Although you can use Toon Boom to produce standalone SWF files, it’s likely that your cartoons will be integrated with files/interfaces produced in Flash. Toon Boom Studio is specifically an authoring environment for character/set animation, and thus does not offer the complex interactivity provided by Flash MX.

Toon Boom Studio’s interface is well laid out and fairly intuitive. It’s also friendly and engaging. The environment is very conducive to character animation. All of the tools are fairly self-explanatory, so much so that it is easy to get started without looking at the manual or any tutorials. It basically consists of two modes: Drawing and Scene Planning. Drawing is where you assemble your character animations; Scene Planning is where you animate your sets and cameras. 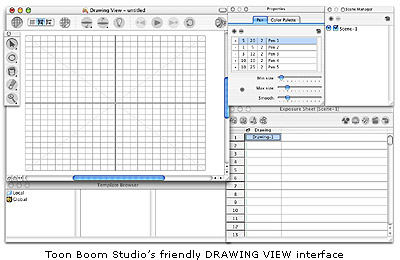 The Drawing View window is the primary interface and functions as a digital version of a traditional cel animator’s light table. This is somewhat like Flash’s onion-skinning feature, but with an “exposure sheet” that refers to drawings rather than frames. If you are at all familiar with traditional cel animation, this setup will make you feel at home.

The toolset is refined and simple and features everything you need to draw, paint, and edit your characters. The “pen palette” offers a number of selectable drawing points that can feature variable widths and different smoothing settings. Of course, the variable widths only work in conjunction with a pressure-sensitive pen and digital tablet. I would highly recommend purchasing a digital tablet for use with this application, if you do not already own one. It is simply too difficult to try to draw with a mouse, especially in an application like this where you are trying to achieve a more natural, artistic look.

The Scene Planning mode is much more complex than the Drawing mode, and will take some studying of the manual to figure out. Although the timeline here is Flash-like in its frame layout, much of this interface is unique to Toon Boom Studio. Perhaps the most interesting and desirable feature of the program lies in the fact that the scenes can be assembled and animated in a three dimensional space. All of your characters and objects are flat, mind you, but cameras can be animated to relate to the scenes in ways that simulate 3D relations between objects. This lends a more realistic feel to animations, and brings a sophistication to vector animation that is sure to impress.

If you are seriously considering breaking into character animation, I can think of no better starting point. It’s a powerful combination of traditional and digital vector animation. If you need any further convincing, consider this—the company that makes Toon Boom Studio also makes USAnimation, a high-end animation software application for TV and film studios.

Although version 2 for Windows has been out for some time, version 2 for Mac is still in development. It’s a good bet that the release is not too far off, though, as the manufacturer is currently offering a free upgrade to 2 for those who buy the current Macintosh version (covered in this review). A trial version of the product is available at the Web site, as well as numerous examples of animations created with the software.