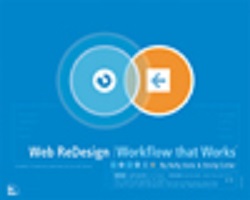 I’ve been looking for a good book on the process of web design for a while now. David Siegel’s The Secrets of Successful Web Sites looked good, but it was published four years ago… so I’ve been waiting for a long time.

Finally, the book I’ve been searching for is here. Author Kelly Goto is well-known as a speaker at the acclaimed ThunderLizard conferences on web design and has been pestered for years about writing a book. The book came to fruition after she finally met her collaborator, Emily Cotler, after Cotler interviewed her for Publish magazine.

You would hope that a book about project management would be well-organized, and in this case, you would not be disappointed. Helpfully dividing their process into five phases, the authors spend one chapter giving an overview of the entire process, then detailed chapters exploring the minutiae of each phase. Throughout, the book is filled with useful charts, checklists, and, most importantly, real world examples and case studies, though the latter might have been expanded into more than a two-page spread at the end of each chapter.

In addition to useful case studies, the book is peppered with short “Expert Topics” with advice from other bright lights of the web – Jeffrey Zeldman discusses web standards, and Jakob Nielsen discusses usability testing. These are easily digestible “breaks” from the chapter and introduce the reader to a wide range of other personalities and perspectives in the world of web design.

Part of this book’s appeal is its confidence that the process it describes will work for everyone. Readers, especially management types, like “authoritative” references, and this book makes authoritative claims.

Despite its strong tone, it does not dictate actual design or content “rules” and so it will not ruffle the feathers of the designers and writers on your team. If your “team” consists of just you, it will probably bring much needed structure to your actual work process. The beauty of the Core Process described is that it works equally well on all web projects, regardless of size, scope, or budget.

The Phases of Development

The chapter entitled “One Process Fits All” begins with an illustrative flow chart that breaks down each of the five phases:

The rest of this introductory chapter is devoted to a short summary of each phase, with the following chapters developing each phase in greater detail. Every chapter begins with a helpful chart entitled “What This Chapter Covers” and ends with a succinct summary, reinforcing concepts the way any good teacher would.

The first phase consists mostly of gathering and analyzing information about the goals and aims of the project, and then doing the budgeting and planning. The authors break this phase into three sub-tasks: Discovery, Clarification, and Planning.

Phase Two is where the hands-on work begins. This phase is also has three sections, though in this case each of those sections addresses Phase Two according to the objectives of the project.

Content View involves defining content. In a redesign, there are relevant issues surrounding pre-existing content. Should it be used simply because it’s available? Will it need to be updated or edited?

In an initial design, the content must actually be produced. Site View is concerned with overall site structure and defining the relationships between individual pages.

Page View addresses topics like navigation and the labelling of icons and buttons.

Phase Three is concerned with the actual visual design, the look and feel of the site. This is where the creative work begins. Three sub-tasks are defined here as well: Creating, Confirming, and Handing Off. Concepts are developed and refined in the first, a protosite is developed and tested in the second, and finally, graphic templates are created for handoff to the team (or individual) doing the actual HTML production.

The fourth phase is where the bulk of the production work and QA testing occur. Again, it is helpfully broken down into three smaller pieces: Prepping, Building, and Testing.

Building is the described as heart of the whole process – which won’t come as a surprise – and is where the bulk of the work of actually building pages, optimizing images, and implementing scripting and other functionality will occur.

Testing, obviously, is where all the QA issues will crop up. The authors emphasize the importance of developing a QA plan which will cover all potential issues. This sub-phase also includes all the fixes for potential bugs and usability issues.

After this, the book discusses Phase Five, which is concerned with the site actually going live. The three sub-phases are Delivery, Launch, and Maintenance.

Delivery – actually handing over all the files and documentation to the client – is an important milestone in the project, and the authors recommend holding a “post-mortem” meeting around this handoff. It is also important to schedule some training for the maintenance team.

The actual Launch is a very small part of the overall time line, but it is important to adequately prepare the site’s audience for the event by communicating clearly with the marketing department so that announcements can be made. It’s also important to make sure the site is submitted to the major search engines, even in the case of a redesign.

Maintenance is an essential component of the site’s success, and the authors recommend that the maintenance team be up to the task. An assessment of their capabilities should be completed and any shortcomings be addressed. A detailed maintenance plan should also be in place by this time. If the site has been redesigned, it is useful to have some apparatus in place to measure the new design’s effectiveness. Reporting these results is the responsibility of the maintenance team.

Along with its companion web site, Web ReDesign: Workflow That Works provides web producers, designers, and webmasters with a full set of tools for the creation of both new and redesigned web sites. My enthusiasm is only slightly marred by the title, which may cut out a great portion of the book’s potential audience, leaving them with the impression that it only deals with redesign issues. Goto and Cotler have left very few stones unturned, and I find myself completely satisfied that this book will be for the next few years what David Siegel’s was for the past few: The Book.