If you have recently upgraded to Flash MX, then you might ask, “why do I need a separate video processor for Flash?” Well, if you’re fine with just delivering content for the Flash 6 player, then you might not.

But Wildform’s Flix remains the only video processor that works with earlier Flash players. While Flash MX offers video quality slightly superior to that of Flix, it’s still pretty decent. The simple and intuitive user interface allows users to choose from numerous bandwidth-specific presets or customize the various aspects of the desired output. 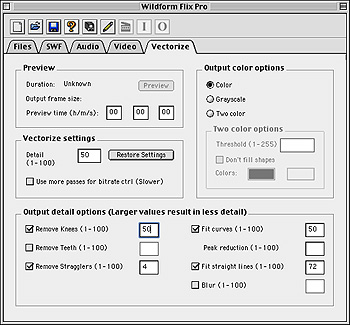 Flix Pro can export in 4 formats: Flash 3/4/5, Flash MX, Vector and FLV. In addition to that, it can also export html, email, a JPEG of the first frame and separate projectors for Mac and Windows, for users who don’t have a plug-in.

The greatest feature, and the reason that everyone should consider this program, is that it converts simple video into vector animations. Let me stress the term “simple.” Increased detail degrades performance and adds considerably to file size. However, if you have a simple subject with a fairly uniform background, then this works rather well. The example that the Wildform website uses is a bird flapping its wings across an empty sky. If you want to turn a shot of Manhattan rush hour into vector video, forget it.

One of the best features of Flix is that it allows you to control image simplification so you can choose the best balance between image integrity and file size. I was impressed at the number of options available for controlling the vector output. What you end up with is a file that you can further edit in Flash, which is great if you aren’t satisfied with what Flix generates.

If you need to deliver video over older Flash players – which is something to consider since most people have not upgraded their Flash plugin yet – then this is the only solution available. Thankfully, Flix is a good product and is very easy to use. If you are looking to add vector video to your Flash projects, Flix is again the only solution available.