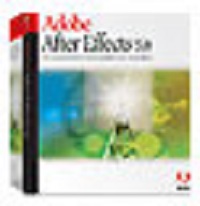 Building on the solid foundation of version 5, Adobe After Effects includes several enhancements and new features that will be of interest to animators as well as digital video and video effects designers. Users with the web in mind will be happy to see advanced Real Media output and the ability to import SWF files, and Mac users will now benefit from native OS X support.

The new Effects palette aids in keeping effects organized more efficiently, dynamically showing the effects applied to the selected layer. Along with this improvement are enhancements to several effects, plus brand new ones like Color Stabilizing, Levels, Grid and Time Difference. Masking and Expressions (the internal scripting function in AE) also receive improvements to boost creativity and efficiency.

Version 5’s introduction of 3D compositing took the application to a whole new level. 5.5 adds to that multiple 2D and 3D views, which lets you preview your comps from several angles simultaneously–much like you do in 3D applications. Also included is the advanced 3D renderer, which was previously only available as a separate download. This option offers powerful control and realistic 3D results for movies that include intersections and need to utilize shadow maps. Other new 3D features include the ability to import camera data from some 3D application formats, and expanded control of layer materials.

There are several reasons that After Effects is so popular, and the application continues to pack on high-end features with each release. If you can afford it, the Production Bundle option will amaze you with its capabilities–not to mention the 5 Production Bundle plug-ins available for free download at Adobe.com, plus the included free Zaxwerks 3D plug-in.

After Effects is the motion design tool of choice for designers in the web, video and feature film industries. It is easy to use, spits out incredible results, and is one of the few software applications out there that actually inspires creativity. I am working on an animation project with After Effects right now, and every time I open the program I discover something that blows me away.