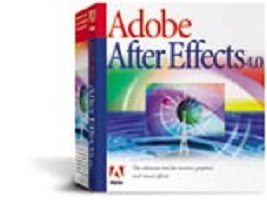 Digital video has a prominent future on the web. As soon as we can get past the bandwidth issue to a point where full-screen streaming video is no sweat, many of today’s web designers will be full-on video graphic designers. We already see this in some of the amazing examples of Flash work out there, but vector animation just doesn’t come close to what can be done in full-motion video. Adobe® After Effects® is THE tool to use for video graphics, special effects, and 2D animation where digital video is concerned. And because mini-DV cams are becoming so popular these days, AE will undoubtedly become the Photoshop of the video designer’s toolset. But it’s still a useful tool for web designers of the present, because it can be used to create some great gif animations and Quicktime movies.

After Effects’ range of use is incredible. At the low end it can be used to create simple 2D animations and titles. At the high end, it is used as a compositing and special effects application by major motion picture and television studios. It’s really incredible that an inexpensive desktop system utilizing AE turns out the high-quality work it does.

The nicest thing is that it’s a friendly application to approach and learn–with Adobe’s “Classroom in a Book” you can become a competent user within a few days. And, oh yes, please do read the manual. That said, After Effects does not teach you how to be a motion designer and does not create things for you. It would be a good idea to study the subject before you tackle any major projects. I was lucky enough to get a crash course in motion design interning with HBO Studio Productions in NYC, where I was first exposed to After Effects shortly after it was acquired by Adobe.

While AE has kept its best qualities since that early version, there have been quite a few improvements, which brings us to version 4.1. Since most of you have probably never touched this application, I think I should run through the basics first:

Think about After Effects as Photoshop for video. Visual content is arranged on layers on a timeline–allowing the user to control when a layer is visible and to apply different effects to a layer’s image over time. Numerous effects are similar to Photoshop’s filters, plus Photoshop effects can be imported for use. Also ready for use are adjustment layers, which can be applied to several layers just as in Photoshop.

After Effects’ animation properties are object-based, which means that frame-by-frame editing is not necessary for most projects. Not only is this an easier way to handle animation, but more powerful– for example, stretching or compacting the time-span of an element is as simple as clicking and dragging. Each layer has sets of attributes that can be controlled in the timeline, such as opacity, position, and rotation. Key points mark values of each attribute, and serve as milestones for tweened movement. And to speed up workflow, key points can be cut, copied, and applied to other objects.

After Effects handles numerous content formats, which allows the seamless integration of movies, still images, and audio files. In addition to handling 2D animation, AE can also import 3D files created in various applications from low end to high end. Once a project is finished, it can be output as a gif animation, a ready-to-play movie file, or a still image sequence for output to a high-end digital video workstation.

Adobe has been fine tuning all of their products toward tight integration with each other, and After Effects 4.1 is no exception. The purpose of this is to make jumping between Adobe applications while working easier and faster, and to share the most useful tools between them. 4.1 now uses tabbed windows to save space and make organization easier. Like I said before, AE is somewhat similar to Photoshop. This version imports PSD file with layer effects and adjustment layers intact, so changes may be made without degrading the image quality. Also newly available are the free-transform tool, and color/transfer adjustment controls. Imported Illustrator files can maintain their layers rather than coming in flattened, and AE also provides alignment and grid features similar to Illustrator. Adobe Premiere, AE’s close partner in desktop video production, also lends some ease of use and features. Imported Premiere projects come in very organized, and users now can use third-party premiere plugins from within After Effects.

Masking in After Effects is somewhat similar to Adobe Photoshop, but tremendously more complex. Each layer can have up to 128 masks, which makes for incredibly subtle and realistic effects. Masking serves many different purposes within AE, but is probably also the most time-consuming task. However, the results are well worthwhile. Some simple examples of dynamic masking are letters that draw themselves onscreen, and moving mouths on characters. Needles to say, masking in After Effects is the most complex out of any Adobe product. It is also probably the most responsible for lending animations such realism.

Version 4.1 also introduces enhanced support for audio within the program. Looping, time-remapping, downsampling, and some high-end effects are there for quick use, and will be helpful when assembling a project and introducing some effects appropriate to the project. This is not to say that AE eliminates the need for a sound design program. If you’re producing high-end sound work for use with your project, you’ll most likely be working with a desktop sound application in conjunction with AE. But it’s nice to know that you have the ability to do some final sweetening within After Effects, and with top-notch results.

4.1’s RAM preview plays the movie in real time, allowing users to make minor tweaks and preview quickly, which is a godsend. Some projects can take hours to render, so seeing mistakes that need to be fixed after that can make a person cry.

The production bundle is aimed at high-end professional users and those interested in using some intense special effects tools. While it is priced considerably higher than the standard version, it more than pays for itself when you consider the capabilities it offers against the more traditional methods used in the special effects industries. Taking that into account, it’s really very inexpensive. The production bundle adds numerous modules that expand and enhance existing controls, plus new features that are just incredible. In addition to high-end matting, color control, and distortion effects, also available are audio effects usually found in expensive apps like ProTools. The coolest part of the production bundle is particle effects, which let you create things like snow, fire, falling leaves, and explosions- these things are all synthesized and controlled within After Effects. These effects offer capabilities previously introduced by third party modules like KPT Final Effects, so it’s nice to see that Adobe is focusing on making popular features like that standard to the production bundle.

Speaking of third party plugins, there are numerous companies out there with offerings for After Effects. These even further advance what can be done, but can also be very expensive. The AE CD includes several demo versions to get you started looking at these. But I think that unless you are a video professional, you’ll be fine with what’s already in the box.

After Effects will hold a prominent place in the toolbox of the future web designer, as fatter bandwidth will allow more ease for video. But it’s also a great tool to have right now, especially if you are involved in the production of CDROM/DVD/kiosks, or other interactive projects. Its high-end capabilities really put power into the designer’s hands, and helps to push the design envelope even further. I have used it to add subtle, realistic effects to GIF animations, which could not have been created anywhere else. I have also used it to create exciting 2D animations for video projects, starting with just Photoshop and Illustrator files. After Effects can bridge the gap for 2D designers to animation with a relatively easy learning curve, and offers tools for the high-end producer that will astound audiences.