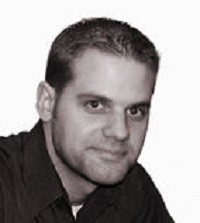 Digital Web: You wrote a SitePoint article where you said, “Good designers copy, great designers steal.” With digital rights being a hot issue, how can designers accomplish this without doing anything illegal?

Cameron Moll: Retreat to a cave and isolate themselves from civilization.

I jest. But seriously, it’s literally impossible not to be inspired by the textures, the vibrancy, the palettes that surround us. The point I tried to make in that article is merely that good designers imitate, great designers produce work they can unequivocally call their own, regardless of whether the work was inspired, stolen from one’s self, or borrowed from discrete sources. And I think that’s the difference between borderline piracy and original work. Even then, I’m sure we’ll always see whistle blowers. A reader emailed once, concerned that my work on Hiram.edu was too similar to UFL.edu. So apparently no one is safe.

DW: In another SitePoint article, you wrote about how “great home pages really suck.” What are the elements that make a successful home page?

CM: Anything that accomplishes the site’s objectives and goals. Really, that’s all it comes down to at the end of the day. I wish it were as simple as “The Seven Habits of Highly Effective Homepages,” but no single list will work for every possible Web site strategy.

Instead, it’s about understanding just two things: The needs of your site visitors, and what you hope to accomplish as an organization. As designers, we spend a great deal of time mastering layouts that adhere properly to grids, authoring impeccable CSS code, and the like. And rightfully so. But frankly, none of that matters if it doesn’t serve a specific objective. What matters is that we understand the goals at hand, and then deliver the process, the technology and the design needed to satisfy those goals.

Sure, you might be able to formulate a general checklist with things like fast download times, usable navigation, and so on. But a fair amount of that is still subjective. I’m confident the best checklist is the one written exclusively with your own objectives in mind.

DW: When you were working on your degree, did you plan on working in Web design? If so, why did you choose a marketing degree over design?

CM: I kind of fell into Web design while studying marketing and somehow got lucky, to be honest. And yet the two go hand-in-hand quite nicely. I’ve always been good with my hands, and I’ve always appreciated the art of strategy. Mix the two and you get this marketing/design hybrid challenge that’s rather enjoyable.

DW: You were part of the Fab 5 in Design Eye for the Usability Guy playing the print design dude. What print design tips can you share?

CM: Sheesh, having spent the last six months almost entirely on print work, you think I’d have something wise to share here. I started out primarily on the Web, and then slowly added print experience along the way. I’ve learned mostly by mistakes, sadly enough. CMYK was tough to get used to at first. Contrast is more subtle in print than it is on screen. Gradients and drop-shadows generally don’t fare well offline. And so on.

Tips, you ask? I can think of two right off the bat. One, get a quality paper trimmer, preferably a rotary one. They put scissors to shame when it comes to prototyping. And two, paper selection and who prints the piece will largely affect the outcome of your work. Choose wisely.

DW: What are the more frequent mistakes you see in Web design?

CM: Lack of attention to detail is perhaps the most common. I’m amazed at how many designers miss the boat when it comes to details. Misaligned type. Resized photos that haven’t been sharpened. Fuzzy edges. There’s no excuse for it. After all, this isn’t print where what’s on screen is often slightly different than what rolls off the presses—you’re seeing exactly what everyone else is seeing, right there on the monitor in front of you.

DW: What is your Web design philosophy?

CM: Probably something pretentious like, “Never Stagnate, Always Evolve.” I constantly challenge myself to make each project somehow better than the last. Granted, rush jobs and tight budgets often prevent that from happening, but I strive for it nonetheless. I fear the day I no longer outdo myself on a consistent basis is the day I’ll quit designing.

DW: What do you see as the big topics and changes in Web design in the near future?

CM: The return of thought, oddly enough. We’ve become slaves to convention. We’ve forgotten what it feels like to blaze a new trail. I suppose it’s similar to the idea of never stagnating, always evolving. Of course, we can’t discount convention entirely, because there’s a point to it. I think I’m just yearning to see some of us produce work that’s more fresh and imaginative than we’ve seen of late.

CM: Good question. Probably those that can muster up the strength to produce genuine work and author solid articles—week in and week out. That likely includes 75% of the thought leaders we’re already familiar with.

But these types of predictions are always tough because we haven’t even heard of some of the soon-to-be thought leaders that will make a difference in the coming months. For example, Jim Coudal, though relatively well-known previously for Photoshop Tennis (among other things), came out swinging in 2004 with a solid redesign and stellar content and schooled even the best of us. So in 2005, who knows? If I had to choose from among the current under-recognized crowd, I’d place my bet on someone like Paul Nixon or Nazarin Hamid. They’ve both shown a formidable desire to break the mold in one way or another, and yet their work is sensibly usable. And on top of that, they’re pleasantly intelligent.

I’m excited to welcome whatever lies in store in 2005. Honestly. We’re way past the all-Flash phenom. We’ve embraced standards. We have plenty of experience with the medium. And budgets are finally back in style. Now it’s time to lay it all on the table and see what comes of it.

CM: I’m not entirely certain there’s anything I could share that a fair portion of Digital Web Magazine readers don’t already know. Though over winter break, I had the chance to meet with Daniel Wood, lead guitarist for The Cassey Golie Band. He handed me a copy of their latest album, and while enjoying it during the ride home, for some reason I was reminded that designers, much like musicians, have to bring something different to the table. We’ll see a lot of new faces enter the market this year, most of which will eventually exit the market because they failed to differentiate themselves and their work. Maybe that’s my gem of wisdom that not everyone knows. Because if they did, perhaps we wouldn’t see as many faces exit the market.

DW: You’ve played the drums. What were your favorite songs you liked to play?

CM: Jazz standards. Swing and big band were always enjoyable because the drummer was a driving force in the music.

DW: You’re a musician and a Web designer, two creative roles. How do you define creativity?

CM: I recently enjoyed a brief email conversation on this very topic with Brian Williams, technical design director at Wachovia Corporation. Brian tells me he’s a fellow designer/musician hybrid, an accomplished pianist, and had this to say about the issue: “I wonder if the ability to play music predisposes some to gravitate toward, or more intuitively ‘get’ Web design? Both are highly technical arts; and both require that an abstract ‘language’ be learned to facilitate expression.” Beautifully stated. You should have probed Brian on that question.

My take? Creativity knows no borders. It often ignores mediums. I wouldn’t be the least bit surprised if most Web designers are also talented in the fine art of paper airplane folding. Continuing with Brian’s language analogy, I’ve found that once you learn a second language, learning a third comes much easier, as you become familiar with the intricacies of language patterns and sentence structure. But you’re still challenged to understand the how to turn all that into meaningful communication. It’s much the same with music and Web design. There are notes you follow, practices you adhere to. But then there’s the blue note—the unconventional layout. Things that require an innate sense of creativity. Things, dare I say, that require thought.

DW: Any plans for authoring a book? If so, tell us about it.

CM: Oh, no plans just yet. I’d love to see it happen sometime down the road, and if all goes well, maybe it will. Readers were kind when I posted an inquiry along those lines (see On Penning Titles), and so I think it’ll be a matter of narrowing down what I could offer in the pages of a book before deciding to actually write one.

DW: You’re a fellow parent of three kids (all boys, and I have a girl and two boys). How do you balance your life?

CM: Ha! If balance is a measure of success, consider me a failure. You know as well as I how difficult it really is. What weighs most heavily on me is that I’m passing through the most important years of career development right now. Suzanne and I are uncertain where we’ll be five years down the road. Yet, we’ve got three energetic and enthusiastic boys, all under the age of five, that are passing through the most important years of mental and physical development right now. So it’s a dichotomy that requires care and attention. The balancing act is overwhelming at times. But you do your best. You stumble. You adjust. You learn. And in the end, hopefully it all magically works out.

Cameron Moll is the product of home-bred graphic design, experienced in both Web and print disciplines. He occasionally whips up a mean marketing plan, too. Cameron spends his free time inviting others to become authentically bored at his Web site, cameronmoll.com.