Digital Web Magazine: Tell me about your role in the making of Professional CSS: Cascading Style Sheets for Web Design. Where did you get the initial concept for the book?

Christopher Schmitt: The idea for the book came around shortly after the end of CSS Cookbook. The CSS Cookbook is essentially a series of Web page development problems and solutions. It’s great when you’re building a Web page and, say, run into a problem with how to style an ordered list or want to figure out the styling of pull quotes, etc.

With Professional CSS, I wanted to cover the bigger context of what it means to build a page design with CSS. This meant to look through a range of professional sites at the CSS, yes, but also other aspects of Web development.

A great Web site isn’t just having one designer being knowledgeable about CSS. It also means having the skills and insights into a lot of other areas of Web development. No matter how cool the next hack of Windows IE is, it won’t be the only thing that pushes your site from ho-hum to award-winning.

So I went out and picked some great sites that utilized CSS in some amazing ways. Deconstructing several excellent Web designs—sometimes by the people who actually built them—can only help readers learn about the process in designing for the Web.

DW: Who is this book for?

CS: The main focus is those designers who understand CSS at an intermediate to advanced level but are not clear on how effectively develop CSS-enabled designs at a professional level.

That means it should be good for any professional Web developer who has been exposed to CSS, but needs a better understanding of how to put the pieces together to create a professional Web site.

Also, I think there is a strong secondary audience for professional designers: those professional Web developers learning CSS (without any knowledge of traditional, ’90s-era design practices) who want to understand the best practices for utilizing the technology.

DW: Why did you choose Mark Trammell, Dunstan Orchard, Todd Dominey and Ethan Marcotte to be your co-authors? What expertise did each bring to the table?

CS: I really didn’t have a preset number of people I wanted for the book project. I went looking for some of the best designers that are out there. Not only did I want great designers, but I also wanted designers that had the CSS expertise as well. When you go looking for people for both those skills, the list of names starts getting smaller.

I’m very honored that Mark, Ethan, Dunstan and Todd came aboard for Professional CSS. The readers are going to learn about the process of building great sites through the writing of the best names associated with great design and CSS.

DW: At Digital Web Magazine, we’re into worldwide virtual collaboration. Tell me how you successfully managed a project with four co-authors located in different parts of the country.

If you don’t care about the project or don’t take the time to pay attention to the details, it will die just like any relationship. And that’s the attitude I took diving into any project including this one.

This was, I should note, the first time I wrote a book project with more than one co-author. The first one book I co-authored was Adobe Photoshop CS in /files/includes/10.css Simple Steps or Less with Micah Laaker from Yahoo! With that book, Micah and I divided the work and started working on our own. We would have meetings every once in a while, but nothing that required constant communication. The management of that book was mostly done on the publisher’s side.

Since this book was my idea and as its lead author, I was not only responsible for my communication to the editor, but also for making sure my co-authors and editors were happy throughout the process.

The main tool I used for the collaboration was Basecamp. I’ve used a number of Web-based project management tools throughout my career—a mixture of both custom-made and off-the-shelf. I think what separates Basecamp from those is that it’s one of the easier tools of its kind to use, especially for Web developers.

DW: In chapter nine of Professional CSS, you describe in detail the process for building christopherschmitt.com. Where is the site? We’ve been minding the Jakob for some time now.

CS: After I built my design that’s used in the book, I quickly became bored with it. I am my own worst client. I’ve had a handful of designs for my personal site that I’ve started, got excited about and couldn’t wait to thrust upon the world. Then, after a while, I would find flaws in the design for one reason or another and would feel embarrassed about it.

Also, between writing CSS Cookbook, Professional CSS, and going to graduate school, making sure I had a blog up for all the world to see wasn’t a high priority. I’m not complaining—it’s just that I had other priorities at the time.

The version of the site I write about will be available for download fairly soon from the Wrox site as well as my own site.

DW: A bit about process. If the audience for christopherschmitt.com is Web/computer savvy, why on earth are you building it with IE 5.5 in mind?

CS: The audience is savvy so they won’t be surfing with Windows IE 5.5. However, potential clients and impressionable newbies might be.

DW: What would you say to semantic purists who might pooh-pooh wrapping your logo image in h1 tags?

CS: It makes perfect sense to me.

For starters, it’s better solution than wrapping a div container in order to get a block level element around an image.

The level-one heading h1 signifies content that is the most important content in a page. If I want to present my important logo instead of, say, HTML text—then I should do that.

Some designers are going to hide the HTML text and then bring in the image via CSS, but why go through that trouble? If you have a Web site and are reading this site, chances are you have a logo for your site—don’t be afraid of branding. Place that logo on your page within an h1!

CS: Never thought of that. To be honest, I was focusing to get the book done on time! But, yes, now that you bring it up, having the co-authors would make for a great workshop or a conference panel. If anyone is interested in seeing all five of us on the same stage or at a workshop, drop me a note at schmitt at heatvision dot com.

DW: There is the community of the converted, the CSS-usin’ standards-embracin’ blogroll community that has been building sites with CSS and standards for years. Then there are the great unwashed. What’s it going to take to get the tables-’n’-spacer-GIF heathens to drink the Kool-Aid?

CS: There are a couple of things holding people up from forgetting about HTML tables and single-pixel GIFs (SPGs). One is that CSS is a different way of thinking in terms of Web design. I like to think of it as a whole new set of headaches.

Building with HTML tables and SPGs is a simple model for constructing Web designs compared to CSS. Once you have the basic concepts for traditional Web design methods it’s easy to carry over to other, different designs.

Also, the tools easily available for Web developers like ImageReady and Fireworks automatically spit out HTML tables and SPGs. Schools and small firms buy the complete software packages from Adobe or Macromedia. They rely on using these tools to get their jobs done. So, we will continue to have new Web designers and sites built with HTML tables until these applications are changed.

Another issue is that IE for Windows needs help when it comes to CSS. I actually had a nightmare the other day while I was working on my site design that the new version of IE in Longhorn didn’t fix the CSS support.

That dream taught me two things: one, I need a vacation. And two, it made me realize how easier our lives would be as Web designers if we didn’t have to sweat about Windows IE.

DW: What advice would you give a young person who has chosen to go into the field of Web design?

CS: Forget about HTML tables and SPGs and dive straight into CSS. Don’t look back. I feel envious for people getting into the field today. They don’t have to deal with HTML tables and the poor browsers like IE 3 or Netscape 3.

Also, work with databases and a programming language, like MySQL and PHP, that you will want to stick with in the long term. That will make you a triple threat.

DW: This is your third book on CSS. Is there a fourth book on CSS in you? If so, where would you take us next, considering the current state of browser evolution?

CS: I’ve been writing about CSS since 2001, I believe. Back then I was hoping people would use CSS to create layouts for their pages! Now, we have the CSS Zen Garden to showcase intricate designs with judicious use of Photoshop, HTML and CSS.

If anything, I would like to see another version of Professional CSS in a year or so deconstructing another round of award-winning designs.

For now, though, I’m not interested in another CSS book until CSS 3 support comes out of IE. Of course, I might not be able to wait that long to write another book. 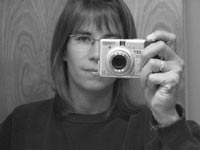 Krista Stevens is the Editor in Chief of Digital Web Magazine. She lives in Winnipeg, Canada, but considers the cottage on Lee River home. She’s a confirmed sled-head who has snowmobile oil running through her veins and “Polaris” tattoed on her behind.