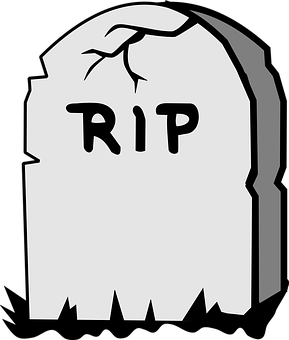 Usability maharishis, with idiosyncratic attitudes and blaring random opinions about design, irritate me. While the importance of their field has been acknowledged for some years now, it is simply a sham to assume or suggest their role is principal (or sole) in shaping user interaction. In this column I will go as far as stating the contrary: design comes first, usability second. Admittedly, this statement is a tad more complicated, but you will get the gist of my point.

First, let us consider the realm of human perception. Perceived aesthetic quality has been studied to great extent in the field of psychology. For example, physical attractiveness influences assumptions about other personality traits. Blue eyes and a cute smile may lead people to assume you are trustworthy. Having a pretty face will get you a second chance. People judge their surroundings based on ephemeral impressions. It may sound cliché but you do not get a second chance to make a first impression. Attractiveness, and other aesthetically-appealing aspects, are physical traits which evoke an emotional response. These play a predominant role in the user experience.

Despite its centrality to human thought and practice, aesthetic quality has, for the most part, played an inconsequential role in user interface and Web site design. There are different reasons why aesthetics has not received the attention it rightly deserves in the high-technology field. While I do not claim to have all the answers, I will discuss some observable points.

First, and foremost, aesthetic quality is predominantly subjective. Perceived attractiveness is difficult to objectively measure and therefore prone to different interpretations. However, subjectivity is by no account a valid reason to alienate aesthetics from the design process. On the contrary— since users base their actions on skewed and biased criteria.

During a recent discussion about design, my knowledgeable friend Andrei Herasimchuck reminded me of a key point that is ignored by most. It has to do with how aesthetics and their perceived value or quality are actually relative. That is, Yahoo, Google and eBay can get away with poor aesthetics simply because, relative to the other offerings out there, in terms of functionality, there’s not much to choose from. Take the automobile industry, for example: nowadays there are no shamelessly bad engine and equipment manufacturers left. Therefore brands such as Ford, BMW and Volkswagen differentiate themselves from competitors by the experience they sell, typified by design. The automobile industry is a mature industry, the Web is not — yet.

Third is the age-old debate between form and function. Numerous usability experts preach the virtues of functional design. Function, or perceived ease-of-use, is critical to any interface, no doubt. But form does not indispensably follow function, rather form inherently influences function. I strongly believe that good design is, de facto, usable. If problems related to interaction occur, something was not accounted for in the overall design.

I strongly believe that design, not usability, is the main driver in shaping user experience. That is, aesthetics, thus attractiveness, directly affects perceived ease-of-use, usefulness and enjoyment. Consequently design, or more specifically aesthetics, is the chief enabler. There are many respected advocates in the field who maintain that minimal use of graphics, large text and high contrast are of key significance. Hence recommendations include minimal or no graphics to improve download time, large type and high contrast for improved readability. In short: improved usability on Web sites.

While it is true that all of the previously-mentioned aspects may, to some extent, enhance overall usability, the question remains: is following such recommendations the key to a usable, successful Web site? To many acclaimed experts the role of aesthetic quality is secondary to function, or as even others suggest: attractiveness is not a factor of importance in user experience. I believe these assumptions are bogus and short-sighted. 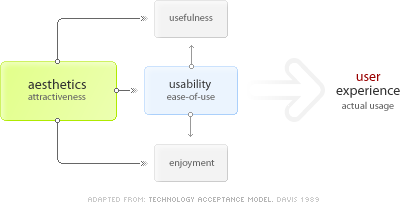 Usability is a shaping factor for actual usage, but a user’s impressions of a Web site—about usefulness, ease-of-use, and how enjoyable the experience is—are formed by the Web site’s visual design. In essence, attractiveness directly shapes perceived ease-of-use. Usability experts might argue that a site can be visually unappealing but still just as easy to use, but this doesn’t take into account perceived ease-of-use. Usability experts play an unquestionably important role in making the Web a more friendly place, but to downright reject the idea that design is primary in user experience is misguided.

Moreover, a peripheral factor of importance, which usability experts more often than not prefer to disregard, is branding and corporate identity. Branding not only affects attractiveness (and vice versa), but also shapes customer perception. Design is a process or practice to shape and communicate effective branding. Choices you make in selecting color, style and type will affect aesthetic quality. In practice, most ad agencies are indeed poor Web site developers but they do understand the need for attractiveness and strong branding.

Navigation is but one of the principal tools that users have at their disposal to find their way around on a Web site — an important tool, to say the least. Failure to implement a good navigation design, scheme and structure is asking for bad user experience. Much thought has gone into how we organize information on the Web. Information architects will be of great assistance in this field. However, making sure you organize your content adequately is not enough; neither is exclusively applying basic usability axioms. Unfortunately these things, in and of themselves, will not make your Web site attractive, useful or enjoyable.

Let me show you how aesthetic quality can noticeably improve user experience. Below I have produced a number of examples which are representative of any Web site selling an assortment of products online.

Good design gives users useful clues about what’s what on a page. In the graphical example I determined the tab metaphor was best suited to shape interaction. Tabs are self-evident and create an apparent visual hierarchy. Not only is the graphical version more pleasing to look at, but by using fundamental design principles—to create contrast and make good use of shape, type and color—it makes for excellent scanability. Color is practical as an additional clue, but should not be relied upon solely.

Users quickly scan pages for something to click (in this particular case a shopping cart). Buttons make users click — this convention has proven itself many times in the past. In the graphical version, the shopping cart icon stands out and is thus easier to target with the eye. Furthermore, the small cart image next to the button instantly confirms the purpose of this widget. Making things self-evident results in better perceived ease-of-use.

Smiling faces inspire confidence and trust. While by and large overplayed, (corporate) imagery and photography have nonetheless a meaningful purpose in personalizing user experience on Web sites. In a physical environment, the store atmosphere may be more important in selling a product than the product itself. Intangible feelings and emotions in experiencing the Web site coincide with, and may even dominate, the tangible product purchase.

All the examples on the right are abstracted from design elements. Download time is dramatically improved by not using graphics, and both large type and high contrast ensure perfect readability. Links are underlined to let users know they may interact with these elements. Fonts are set in relative sizes, hence content can be easily resized to fit user needs. I applied basic usability rules and made sure my navigation was simple and free of clutter. Alternatively, in all the examples on the left, I decided to put the emphasis on aesthetic quality to ensure maximal attractiveness first. Design allows for layering and visual differentiation which creates depth and distinctiveness.

If user interfaces or Web sites in general are going to be effective, they have to work most of their magic at a glance. Design, and more specifically aesthetics, are key to this process. In absolute terms, both sets of examples offer the same level of functionality, yet the graphically-enhanced versions provide the effect of perceived ease-of-use, usefulness and enjoyment—the basic, text-based versions do not achieve this, which, in my opinion, results in a less-favorable user experience. Professionals in the industry should not, de facto, favor usability above design, but rather recognize their coalescence and reciprocal significance in achieving an optimal outcome.

As long as usability experts disregard the role of attractiveness in user interface design, the Web will not be a better place, nor will it get any prettier. The current state of the Web is downright deplorable. We do not need usability experts aggravating the situation by telling us design and aesthetic quality is trivial. Understanding how designers think and operate will lead to better usability through design.