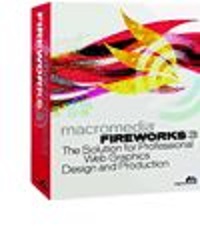 Macromedia’s Fireworks 3 remains a strong contender among web design production tools, and offers many features that make it an attractive alternative to its main competitor: Adobe ImageReady. Fireworks 3 is sold as a standalone production tool, as well as part of the Dreamweaver Multimedia Studio, and may suffer in sales a bit because ImageReady is offered free with the latest version of Photoshop. That said, there are a number of things unique to this application that make it worthy of consideration.

Fireworks 3 is aimed at users who want to quickly produce web graphics, animations, or production comps. It can be used as a one-stop for designing or as a production outlet from an image editor like Photoshop. The tool palette includes an array of useful image and text creation tools, although noticeably missing are some tools that would allow you to skip using an application like Photoshop. Thankfully there are color correction/adjustment tools, but I wish it were easier to more powerfully edit bitmaps within the program. Macromedia has advanced Fireworks 3 quite a bit in the area of handling bitmapped graphics, and has a lot of tools friendly to those most comfortable in a vector graphic environment. There are also very unique features, like a multitude of stroke styles and texture fills. There is enough here to consider it a professional tool, and plenty of evidence that it will speed production compared to using something like DeBabelizer, or previous versions of Fireworks.

Following Dreamweaver’s example, the latest version of Fireworks 3 is also Javascriptable. This means that you can customize the program to streamline and automate your workflow, making often-used commands permanent fixtures of the toolset. Fireworks 3 is also tightly integrated with Dreamweaver, allowing quick work between the two for site development. You can even script Fireworks 3 from within Dreamweaver.

Speaking of quick, Fireworks 3 is also equipped with a handy history palette, which allows you to select any recorded action or series of actions, then apply those steps to the current selection. This is a great feature that is also put to good use in Dreamweaver 3.

File handling is also sophisticated. Imported vector files retain editability, plus vectors created in Fireworks 3 can be exported as Illustrator or SWF files. Incoming Photoshop files come with layers intact, including editable text and effects layers, so there are no worries about losing the ability to go back and make changes. When it comes to output, Fireworks 3 can generate image files and html, complete with hotspots, GIF animations, and rollovers. Batch processing is also a snap.

My biggest complaint about previous versions of Fireworks was the inability to preview your output without going through the export menu. Now Fireworks 3 handles it in much the same way as ImageReady. Selectable preview tabs, including 1-up, 2-up, and 4-up views let you preview what it will look like with up to 4 possible compression schemes. This allows you to pick the best combination of speed and image quality without trial and error. This is a big contributor to work speed, and I’m glad Macromedia added it. What separates it from ImageReady is the ability to preview rollovers in the workspace. The only thing this makes me ask is “why not add this feature to Dreamweaver?”

Fireworks 3’s color handling has advantages and disadvantages. The Color table palette is handy for sorting out and controlling the colors you use, and the swatches palette behaves just like you’d expect. The mixer palette easily lets you drag to a selected color, and the ability to set brush and fill colors right there is nice. The effect palette allows you to quickly select and deselect color controls like levels, brightness, and curves, which helps you avoid retracing steps to make color changes. One thing I wish that Macromedia would adapt is Adobe’s “snap to web colors” picker, which makes it easy to find just the right color combo.

Fireworks 3 works with layers which most users have become accustomed to, with a couple of twists. For example, you can distribute a layer’s object to frames for animation with the click of a button. You can also lock layers from editability, which is good considering Fireworks 3’s handling of selecting objects. With the selection tool active, objects in the composition can be selected no matter which layer is active, which can be good, but probably confusing if you spend a lot of time working in Photoshop.

Creating animations in Fireworks 3 is a simple matter of using the frames palette, but a bit non-intuitive considering the chronological action is represented in a vertical manner. I found it easy to mistake the frames palette for the layers palette when creating an animation. One great feature on this palette is onion skinning, which lets you create precise action by viewing multiple frames at once. Those that create a lot of GIF animations will find it very useful.

Another nice feature is the ability to store graphics and buttons in a library for future reuse, and the button effects are previewable in the library palette, the same as in Flash. This is very useful for keeping track of buttons, banners, and anything else used site-wide or across multiple sites. Everyone knows how bothersome and inaccurate cutting and pasting can be.

The most important aspect of a web production tool is the quality and size of the image files it produces. JPEGs output at the same compression rate as ImageReady are considerably smaller, but are slightly less sharp. The image quality is still very good, and far superior to some of the output plug-ins for Photoshop. GIFs are basically the same story, but in most cases the difference is negligible, so Fireworks 3 takes the prize for the fastest-loading images. Dither control is rather unsophisticated compared to ImageReady, though, with only the percentage selectable rather than the mode.

Slicing up images is easier than in ImageReady. Instead of having to drag a selection with the slice tool, you can either drag or just click on a point to create slices in Fireworks 3. This is a great time-saver, and prevents frustration when you’re a little tired on the job. One thing that I would like to see is a slice-selection tool, as the uses for the selection tool seem to be a bit jumbled when you’re working on smaller images. Users can set and preview specific compression schemes for each slice, to see how the page will look when it’s up on the web. One point of confusion is how to specify between image and non-image areas.

Although Fireworks 3 is aimed at professional users, there are features specifically for novices. The button creator wizard guides one through making an interactive button. The link wizard helps one specify optimization, links, targets, and file names, making the whole output process a snap for newbies. Although these might be helpful for some, most users won’t need them. Thankfully, they are tucked out of the way so there’s no hindrance there in the workflow.

Fireworks 3 is a professional-quality tool that many will be using daily in their web-production duties. This new version puts it head-to-head with ImageReady, and making a choice between the two will probably be based on familiarity with the interface. If you use Dreamweaver to build sites, it’s an especially valuable companion that will undoubtedly save time. It creates smaller image files than ImageReady, and plays nicely with other Macromedia tools. Its only major disadvantage is its price- $100 bundled with Dreamweaver, and $200 standalone. While not outrageously expensive, consider that ImageReady is free with the latest version of Photoshop, which is basically THE standard tool among graphics professionals. Hopefully Macromedia can strategize to compete with that deal, because from a features standpoint there is no reason to look at one application to prevail over the other. As long as they both exist, you can be sure that competition will drive them to continue to innovate web design and production.