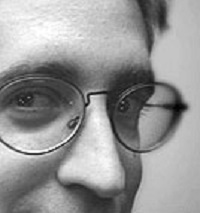 Digital Web: What should come first: the chicken—information and graphic design—or the egg—functionality? Or should there even be a “first” on the Web?

Christopher Schmitt: Yes, there is a first—it’s your audience. But there’s a bigger issue that needs to be addressed: the form vs. function debate.

Digital Web: How so?

CS: Somewhere along the way, the saying that “form follows function” got misconstrued and a debate sprung up in the phrasing of “form vs. function.” And, in terms of Web development when people bring up “form vs. function” what they usually mean is “visual design vs. backend programming.” And when it’s taken in those terms, the discussion is rather pointless.

Digital Web: So “form vs. function” isn’t really a debate worth having?

CS: That’s right. It’s a debate which gets discussed at great length and in great detail. Those that get wrapped up in it are seeing the tools that design a Web site as the all-important issues that need to be resolved in order to make a successful Web site.

As it’s commonly perceived now, the debate is “visual design vs. backend programming.” But actually the meaning behind “form follows function” is that “something should look like what it does.”

For example, you wouldn’t want a toilet to look like a cactus—even though it would be outrageously funny to look at. You would want a toilet to operate like one just as you would expect it to look like one. Of course, if you go to Europe or Asia, toilets look totally different, but that’s more to do with cultural differences. But, I digress. So if you are going to go about building a toilet you need to make it operate much like a toilet and look like one—if you want people to use it.

So the lesson here is that if you are true to the project goals and your audience, then determining the form—that’s both the backend and the visual design—of a Web presence is an easy matter to resolve. What happens often in the very beginning of defining a Web site is that there isn’t an understanding of its purpose.

Digital Web: So the main imperative for a successful Web site is figuring out its function?

Like I mentioned at the start of Designing CSS Web Pages, yes, sometimes people and companies do get lucky on the Web. They set up shop one day and, through a lucky string of events, it’s a success. However, that type of success is fleeting.

To achieve long-term success, and capitalize fully on “overnight” success, you have to build a site on a foundation of goals. Over time the look-and-feel, and the code that powers the Web site, will adapt or be replaced. The long-term goal—whatever that is for you or your company—will stay the same.

Digital Web: Do you see more understanding of how to approach Web site development as the Web matures?

It’s obvious, since the dot-bust, that the economy hasn’t been performing. While the retail sector bemoans every holiday shopping season during tough economic times, companies with their e-commerce solutions in place are making great strides. Customer online spending is in the billions and keeps increasing every year.

If you want to take a look at technology, take a look at the browsers. In the 90s, we had two major browser vendors dictate how developers should mark up their pages in order to get them to work effectively. Now we have browsers who won’t get the time of day if they don’t follow standards. And on the backend, the technology has come to a point where you can build a secure shopping cart almost totally on open source technology. A small- to medium-sized company can purchase off-the-virtual-shelf solutions to almost any problem they might encounter in getting their sites up and running.

Of course, I think one of the biggest things going around is Web services. I really love what Amazon.com and Google have done to free up their information. If Yahoo! were to do the same with their Web services that would seriously open the floodgates. Not only for Yahoo!’s bottom-line, but it would send a message to a lot of other companies that play follow-the-leader. There would be a domino effect.

And, if you want to look at aesthetics, well, the Web has come a long way. Not in terms of what gifted designers can do, but what technologies like Cascading Styles Sheets allow designers to do. Take a look at Curt Cloninger’s Fresh Styles for Web Designers and you will see the start of documenting of styles on the Web.

But with all that growth, and the experience that comes with it, companies and Web builders still need to understand the importance of planning. They need to place a higher importance on the people they serve rather than fueling their own desires of what the site should be composed of or how it should look.

Digital Web: How much should the underlying technology affect a site’s form and function?

CS: Whatever powers your Web site, like the visual design, is a means to an end. The look-and-feel of the design is dependent on what you are trying to do with the Web site and what message you are trying to send. And you need to pick the technological solution that will best fit your project’s parameters.

To a user, a site should just work. In fact, it should be like magic to them. Have you tried NetFlix? Twenty dollars a month to rent DVDs I want to see without late fees? As a former video store clerk who didn’t have a computer to help customers track which videos were in or out, I think that’s amazing.

As a user, do I care what makes NetFlix tick? Not in the least. I care about movies coming out of my mailbox by way of the Web site. I care about being able to type NetFlix into my Web browser and have the site and features at my disposal. Over time, these interactions and transactions build a sense of trust. Not once should I question or need to worry about the gears and sprockets in the machine. NetFlix—or any company that is there for the customer time and time again—has the trust of that customer. Of course, if the site malfunctions or customer service via email starts to slip up, then I would begin to question whether the system deserves my dollars.

Digital Web: Many pundits (Nielsen, McGovern) argue functionality must not be subjugated by design. What do you think?

CS: There are gurus out there trying to find some patterns in the chaos. They look at Web sites, run a number of user tests, and try to discern golden rules to make almost any Web site better if you follow their principles. What I find unnerving is that they seem to proclaim that “one-size-fits-all” and that simply isn’t the case.

No usability guru can solve 99.9% of your Web site problems if you are clueless about your users.

Digital Web: Are there warning signs you should watch for that may indicate a site has too much eye-candy or is too cumbersome to use?

CS: Don’t let your designers tell you the site looks great and accept it at face value. True, we all can just see something and like it. We can feel when a work of art speaks to us. But how many of us want to surf the face of da Vinci’s Mona Lisa while trying to buy a book on Amazon?

And on the other side, never hand over testing of the usability of your site to your programmers. If your Web programmer tells you she can use the site just fine and blames the user for not being able to use the site: that’s a big sign you’ve got a train wreck just waiting to happen.

Digital Web: What are some standards to use when judging whether or not a site successfully blends form and function?

One will have to determine the criteria for success for the site before you commission a Web designer to build it. And once it’s built and launched, check the log files. Check the Web site survey forms and adjust accordingly.

Digital Web: Can you name some examples of sites that focus on making sure form follows function?

CS: If you look at Yahoo! as of today, you can see their focus on helping you find a Web page that’s not Yahoo!-related is not in their best interest. They’ve placed their Web directory at the bottom of the page and it’s been sliding down there for the past few years. What they’ve done is mesh their services and partner sites into and around their search results in such a way that they are helpful rather than being obtrusive like HotBot’s were. Of course, HotBot has “redesigned,” or more like given up, the search engine business altogether.

Amazon.com puts a lot of attention on how their customers use their site, as well as on how they can make use of the information they have in their databases in new ways. It’s an amazing shopping experience that we, as Internet users, have at our disposal and perhaps take for granted. And for a company that wants us to use their site, having us take their site for granted is golden.