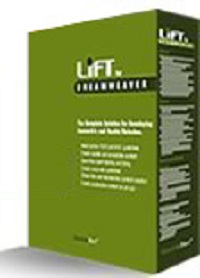 As the use of visual editors continues to grow, so does the need to improve the end product and ensure that the intended audiences can actually use a site. Many novice developers and designers who don’t know HTML are simply not aware that the sites they generate may not be accessible or conform with web standards.

There are more issues than just simple browser compatibility to contend with. A recent challenge is a host of accessibility standards imposed on many websites by the US Federal Government’s section 508 requirements. Also, one must consider the numerous new devices that can access web content, such as net-capable PDAs and WAP phones.

UsableNet’s LIFT™ for Macromedia® Dreamweaver® is a robust extension set for Macromedia’s WYSIWYG editor aimed at making sites accessible under section 508 and compliant with W3C standards. Rather than just make a standalone application to work on HTMLfiles, UsableNet built the functionality right into Dreamweaver, making it a convenient and efficient tool.

Once installed, it’s accessed from the top-level application menu system, offering seven panels to test and revise your HTMLfiles.

The Guidelines panel is the beginning point, allowing users to choose the guidelines by which the other tools will evaluate the html files. A pulldown menu on the panel offers preset tests such as “section 508” and “W3C/WCAG.” Users can also customize the tests to run, combining elements of the different test categories into a single function that will suit the needs of a given site development plan.

The Evaluate panel is the next step in the process, providing a compact interface to quickly run tests on your site files and see the issues that may need repair. Clicking on an issue particular to an html file in this panel immediately opens the file in Dreamweaver. This is a nice convenience. The only thing that confuses me here are the scrollers, which provide no visual reference to where one is in the list. They are also cumbersome, requiring a click on the arrow buttons rather than offering drag capability.

The Monitor panel is identical to the lower window of the Evaluate panel, but focuses specifically on the current open html file in Dreamweaver. Clicking on an issue highlights the element in question. This panel is most useful when you want to deal with only one html file at a time rather than the whole site.

Impressively, LIFT includes additions to Dreamweaver’s reference panel that dynamically up/files/includes/date.css to reflect choices made on the main LIFT function panels. Unfortunately, clicking the “explain issue” button in the Monitor and Evaluate panels opens up the corresponding information in your preferred web browser rather than the References panel. It would be nice if they could figure out a way for this button to just trigger the References panel instead. 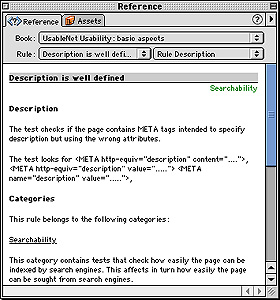 The Fix Wizard panel offers quick standard fixes to clean up the problems it finds with your html files. In most cases the solutions offered will do the trick, but be careful not to automatically click the “apply” button. For example, the Fix Wizard may suggest setting a blank ALT attribute for an image even though that may not be appropriate.

If your only problem is setting ALT values for images, the ALT Editor panel quickly displays all images used in the site and provides a field to enter a value for the ALT tag. This panel should only be used, though, if you are content to set a single ALT value for an image across all pages. If you wish to set ALT tags page-by-page, use the Fix Wizard. Again, I must point out that the scrollers here would work much better in the form of standard scrollbars.

The Reports panel provides a way to add comments and create automatically generated reports on the issues involved with your HTML files. These reports can be page-specific or in the form of a site overview, in HTML or XML. One thing that may confuse someone viewing these notes, though, is that the names of the reports number the site pages rather than make reference to a specific file name. This could get very confusing on large sites.

Once your site meets all accessibility standards, you can use the Approved Icon panel to insert a button graphic that says “UsableNet Approved.” While I think that this is sort of gimmicky advertising that doesn’t belong on a live web site, this is a quick way to point out to team members that a file is tested and ready.

An upgrade to the Pro Suite provides a year-long subscription service at UsableNet.com, which can be renewed. This feature allows developers to track and test multiple sites unlimited times over the course of a year. This is equally as useful as the built-in extensions that LIFT offers, and provides a great way to monitor site development where several developers are working on the same files. Since the tests can be run automatically through UsableNet’s web site, there’s no need to import and rerun tests on all site files. Just tackle the ones that are identified as possible problems.

UsableNet stands behind their product. They offer a money-back guarantee during the first 15 days, so users will have ample opportunity to evaluate the product. You may also request a demo version through their website before buying if you’d like.

Performance is fairly consistent and stable, although some lagging in the correct loading of certain panels made me think I was experiencing a glitch. A few of the panels sometimes hang with a disjointed layout while loading. Other than this, I found no big issues that slowed down work or crashed Dreamweaver.

Overall I found LIFT to be useful and fairly simple to operate in a short amount of time. I actually learned quite a bit about certain suggested design practices that I was previously somewhat ignorant about. It will certainly shed some much-needed light on usability and accessibility issues and help developers streamline their sites to ensure the integrity of their content and design.